"Arose from the depths to lob explosive fireballs from his mouth. Why? Because you can't lob fireballs underwater." 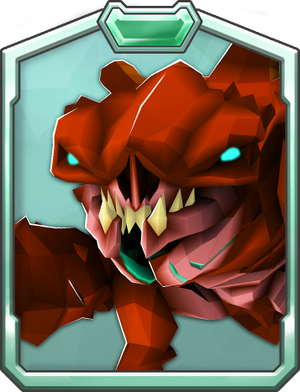 Kaiju is the third-to-last SENSO, unlocked in Downtown Decay.

Kaiju is an entrenched, long range unit that does area damage. Similar to the Mortar, Kaiju deals area damage from a distance. In fact, Kaiju does the same damage as the Mortar at equivalent levels and has the same movement and range. However, Kaiju's health is much higher than the Mortar, giving it more survivability.

Damage two or more enemies with a single KAIJU attack.

The positioning of Kaiju and your opponent's units will decide how effective he is. Unlike other area damage units, however, Kaiju cannot rely on Phantasmo or Brutus to group up enemies for him. Therefore, pressuring enemies into a group to defend an objective is the safest way to progress this achievement.

Kaiju has 315 health and 105 damage at level 3, blowing up these units in one attack, ignoring armor or evasion: