"Gives you a high five from across the map, except his hand is made out of MISSILES." 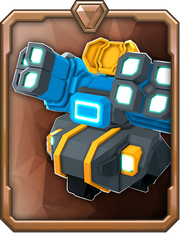 The Longbow is a common unit unlocked in Riverfall Rise.

The Longbow is a long range entrenched unit with salvo. Its long range makes it great for for sieging Extractors or hitting enemies in the backline. The Longbow is also good at dealing with armored enemies, thanks to its salvo trait.

Shred armor with the LONGBOW.

As with any other armor-shredding achievement, it is hard to progress if your opponent doesn't use armored units. When they do, however, make sure the Longbow has a chance to attack it.